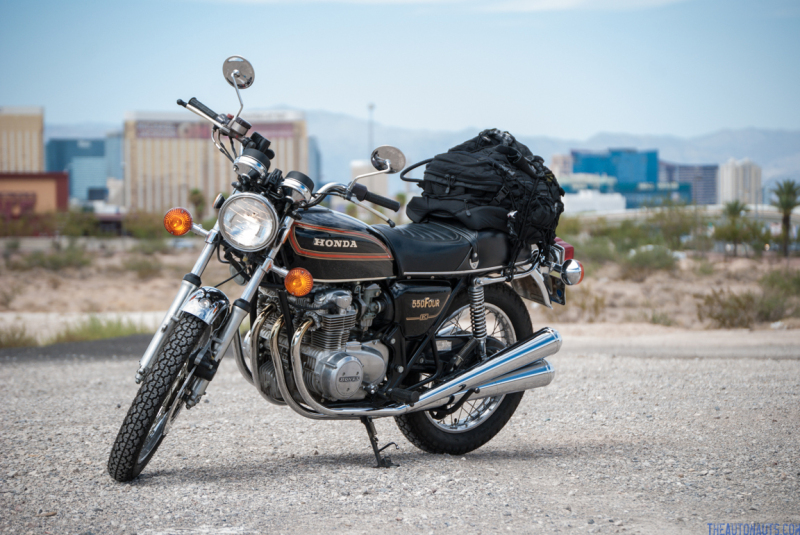 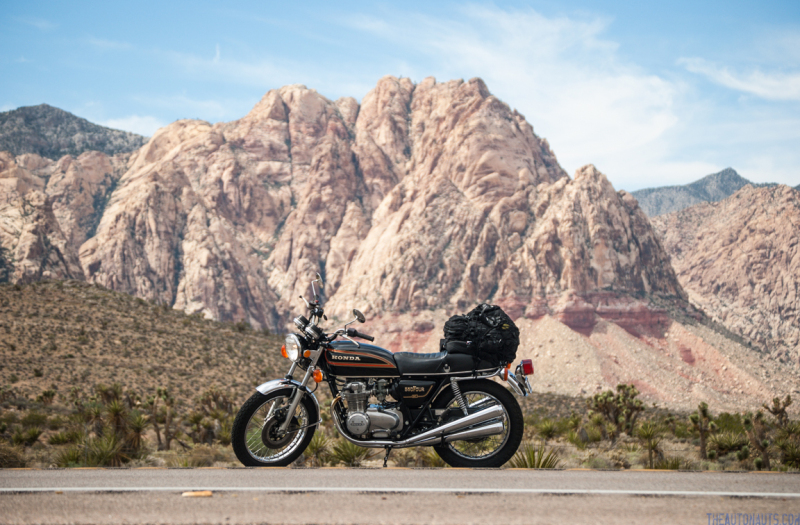 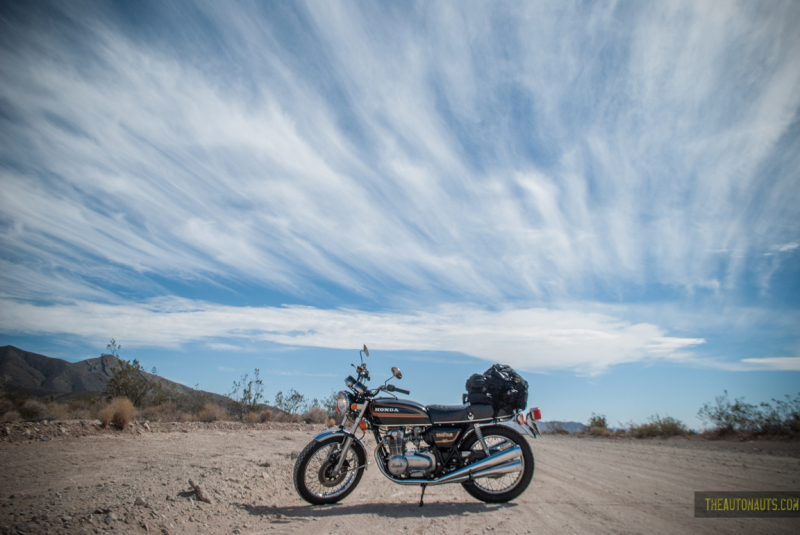 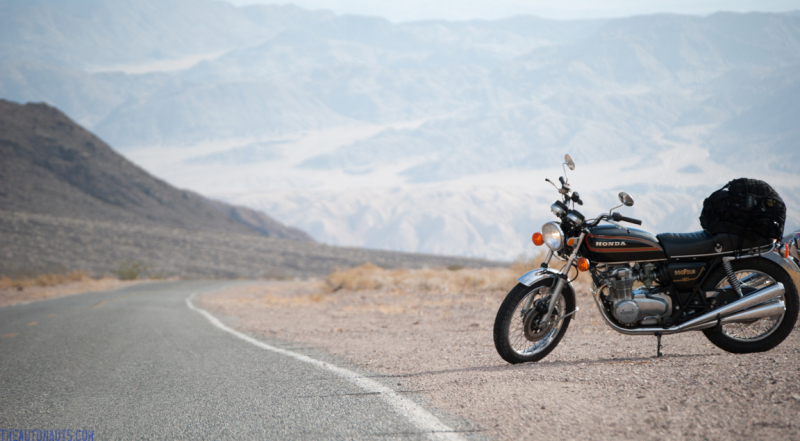 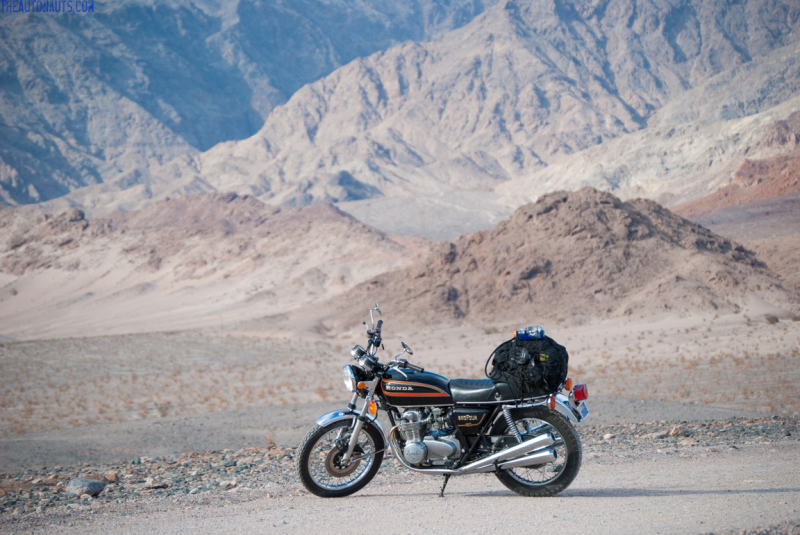 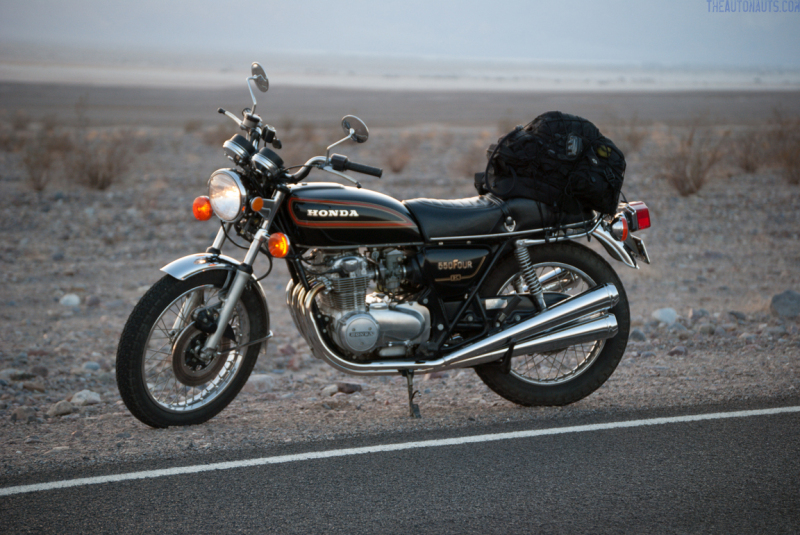 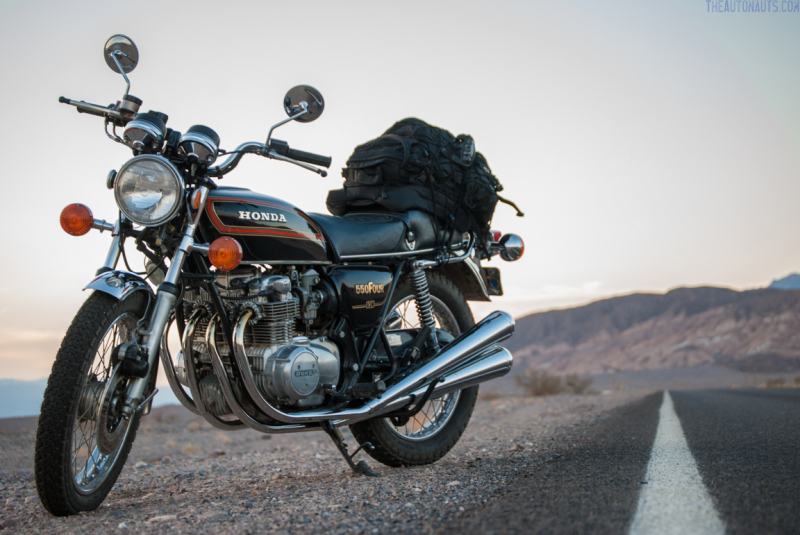 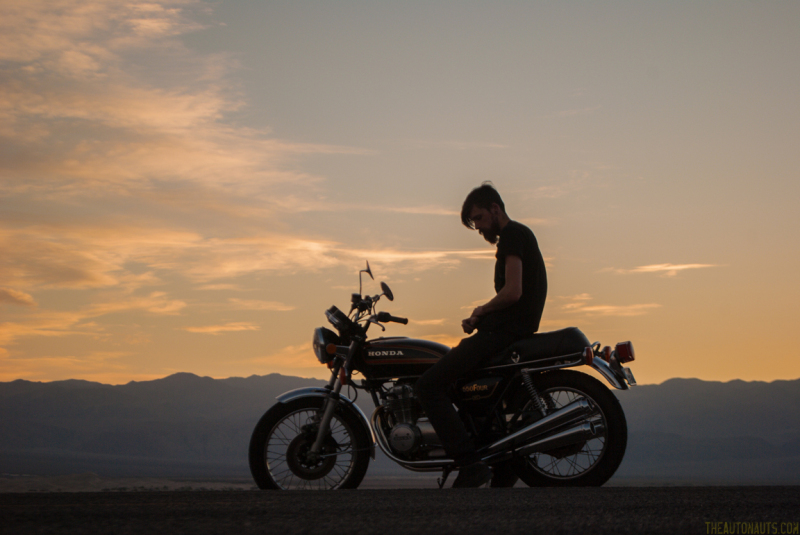 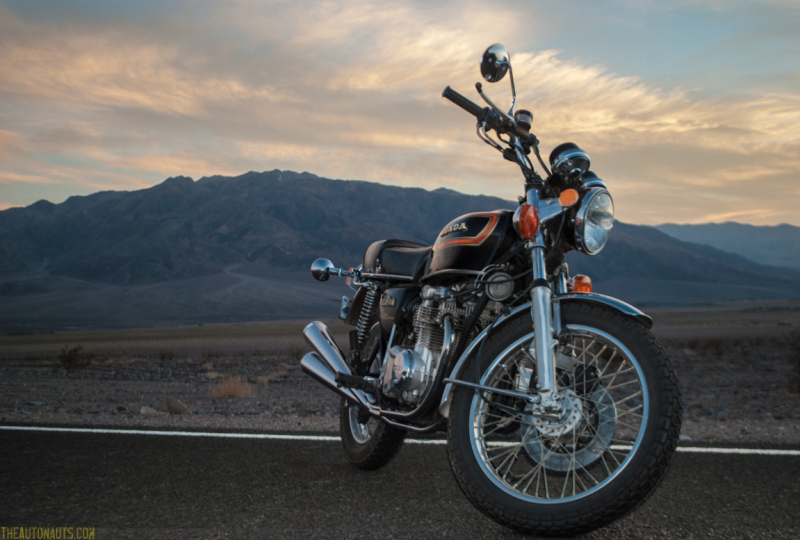 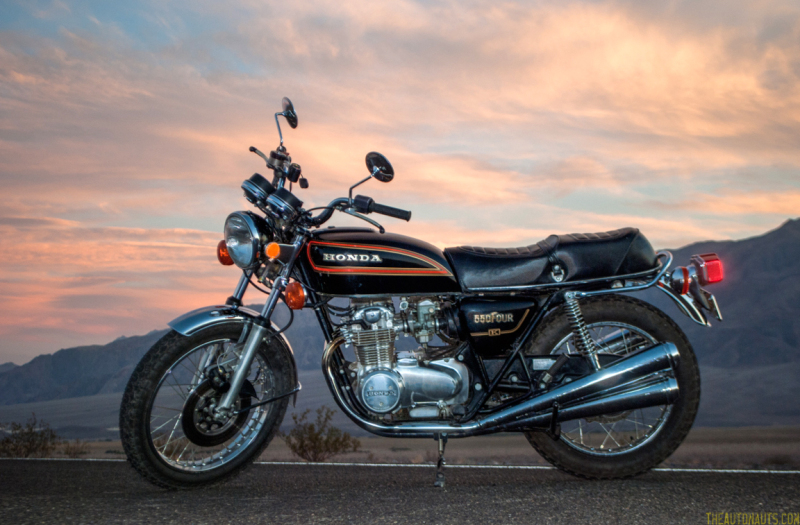 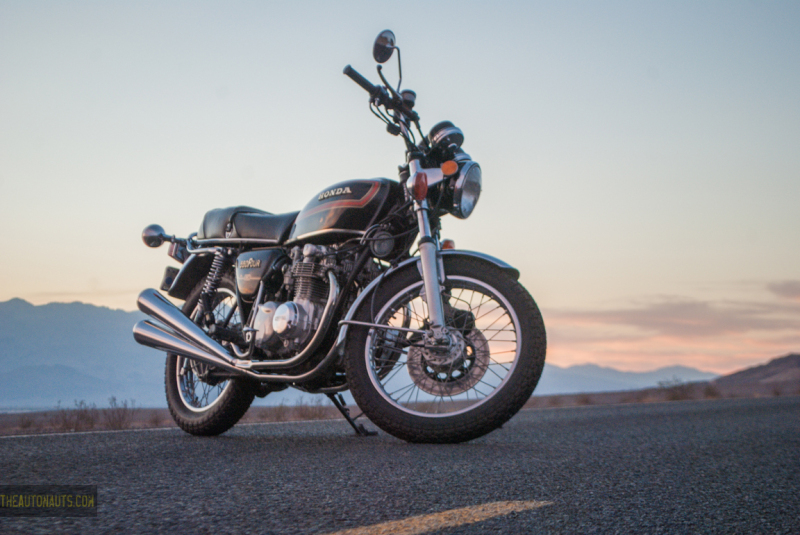 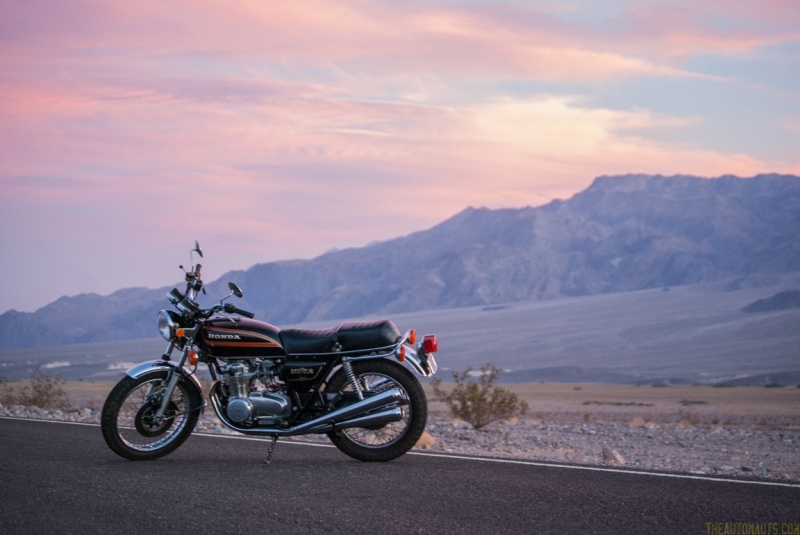 Shaw is one of the more interesting people I know. He’s one of those characters that only comes about once in a great while. He is a perfectionist when it comes to his work, which typically involves fixing, modifying, or tuning anything with two wheels. If his signature is on a moped, it will often demand double the normal price, because you can bet your ass the work was done right. I was intrigued when I heard he had a rather special CB550 in his possession. It was claimed to be a low-mileage example, unmolested and all original.

In typical Shaw-style, he spared no detail while talking on the phone. After we hung up, I knew all about the previous owner, the history of the bike, and why he would not install the included 4-into-1 headers or dual front disk brakes for me before I came down to purchase. He had recently replaced numerous seals that tend to leak when an engine is stored for long periods of time. The deal was made. Dependent on work, I would fly down, get a ride out to his house in the desert, and pick up the bike. The flight was booked.

The following week my excitement grew as I planned my route back. I am no stranger to tedious rides, but this one was different. I’ve ridden thousands of miles through winter storms, but this route would push the limits of my body at the polar opposite end of the thermometer. I had chosen the hottest part of the country at the hottest time of year. What could go wrong?

It’s a law of life that you can’t be in control of everything. No matter how carefully you plan, no matter how much time you put into crafting a route, if you rely on others or depend on external factors you will often be disappointed. My excitement turned to utter distress when I found I’d be running nearly a full day behind schedule. This meant I’d have to sacrifice nearly half of my route to make it back home in time for the work week.

I was able to catch a ride one the floor in a rather packed van with Long Beach Mopeds on their way to Minneapolis to catch the starting line of the Pinball Run. While I’d be exploring the SouthWest, they’d compete (and ultimately win) in a balls-to-the-wall 1,400 mile moped ride down the Mississippi River to New Orleans. They dropped me off in the desert of Southern California at Shaw’s and soldiered onward.

When Shaw took the blanket off the 1978 Honda CB550, I could see it was everything he claimed and more. Most bolts had the original torque-check paint marks. The chrome gleamed. The headers shone in the desert sun. It looked as though it was ridden off the showroom floor yesterday. I didn’t stay long before riding East. I had a lot of ground to cover if I was to make time.

I have ridden sport bikes and mopeds. I like riding fast and hard, but as soon as I hopped on the CB I could tell it was a machine that demanded respect. The tachometer reaches over nine grand, close to a modern sport bike but I told myself I wouldn’t be exploring that high. It was unhooked anyway, as it was in need of a rebuild from being dormant for so long. I risked breaking the internals if I plugged it back in, possibly quadrupling the cost of repair. As I got comfortable on the side streets on my way to the freeway, I could tell that this was the grandfather of sport bikes. The way it handled and responded to my inputs told me it was capable of a lot.

A coworker put me up near Las Vegas for a night. From there I decided to head West to see Death Valley for some reason… I passed many scenic spots in the Red Rock Canyon as sport bikes flew by at high speeds. I was content just cruising.

Las Vegas was hot, but as I descended into the Valley, I felt as though a heat gun was constantly pointed directly at me. I took the lesser travelled route to avoid traffic. The winding roads rewarded me with constant beauty. I couldn’t help but stop to attempt capture of the grandiose scale of everything around me, but with every stop I reminded myself that I’d just be here in this oven longer.

I could barely tolerate keeping my legs on the pegs. The super-heated air running over the cooling fins became only hotter before they burned my ankles. After a while, they were shiny, red, and raw. My riding jacket trapped much of the heat trying to wick from my body. The ambient temperature was 116, but I was still able to appreciate what nature had to show me. The road was hot but the CB kept plodding along, reliably showing me what it could do in every corner.

The sun began to set so I spent a while unpacking the bike and setting up the shots. I could park in the middle of the road without worry of traffic. There was none. I was alone. I FUBAR’d most of my shots due to a bad camera setting, and ultimately ran out of battery.

Riding at night through the desert is an interesting experience. Creatures scatter in the far reaches of the headlight, and the temperature begins to drop to something more comfortable. Almost cold. I reached a small town in Nevada and scored a cheap motel. Before retiring to my room, I watched the bats with an elderly gentleman who was drinking beer in a folding chair in the parking lot.

The plan was to meet a buddy at Walker Lake and ride to Reno, but his Yamaha wasn’t in the best shape to make such a long journey. I rode a long day to Virginia City, then descended down to Reno. While I waited for my friend to stop by his house, I happened across some Burners in need of a fresh mind to help get their truck running. 30 seconds of troubleshooting and the right tools had their accelerator unstuck and them back on the road towards home.

Clint’s Yamaha looks very similar to the CB. It has half the cylinders, but a similar displacement. The style and shape are nearly the same.  But after riding the Yamaha, it became clear just how different they were. The CB was smooth, with every lever soft and the stock pipes quiet. As we took turns leading the way to Tahoe down Mt Rose Highway, I could constantly hear the aftermarket pipes on the other bike. Damn, they sound good.

We parted ways after a bit of gambling in South Lake Tahoe when I had a stroke of bad luck.I could suddenly hear the chain slapping. After pulling over I realized the master link clip was missing from the chain, and the link itself was backed halfway out. The chain very nearly broke, and who knows what would have happened then but it likely would not have been pretty. After several failed home remedies involving pliers and zip ties, I began calling around. No one was open this late on Labor Day so I’d either have to ride 5 miles back to Tahoe and get a hotel, or risk the long ride home through traffic. I decided on the latter and took one last stab on getting the chain straightened out and secured. It was just then another rider pulled up on a chopper. I explained my predicament and he simply said “Follow me”. Two miles up the road, he pulled into the parking lot of an overhead garage door shop and opened up just for me. A few minutes of digging produced the exact master link I was missing. I couldn’t believe my luck as I thanked him, secured the chain and rode off.

Traffic began earlier than I expected, even for a holiday weekend, but it didn’t matter. I was on a bike and lane splitting is legal in California. I carefully threaded my way past cars and hopped off on the first side-road I could find. As I entered familiar territory, I was really able to get on the gas and the CB showed me all it had. A true sport bike. The sun set in a most spectacular manner, and I arrived home shortly after dark.

Hell yeah, I’d do it again.